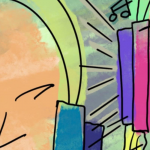 Carl Hanni is the Underwriting Coordinator for Downtown Radio. A long-time denizen of near-downtown Tucson (Armory Park), he has worked his way around many avenues of the Tucson arts, entertainment and culture world since moving to Tucson in 2004. He lived in Bisbee for five years previously, after moving to Arizona from Portland, Oregon. Carl was a disc jockey at KXCI for four years until 2014, and has been a constant as a DJ around Tucson for the last 15 years, starting with the weekly Scratchy Record Show at the long-lost Red Room in 2005. He has written about music and arts for Tucson Weekly, Zocalo and numerous national publications going back several decades. He has also managed the Mercado Flea market, worked at Rillito Downs race track, and been the doorman at Exo Bar/El Crisol. For decades he has run Mod Media, a one-man publicity firm specialzing in doing press and radio for touring musicians.